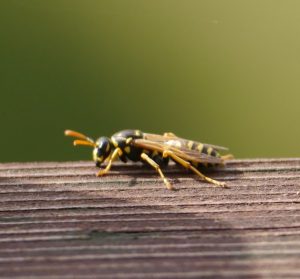 Wasps are social insects living in colonies inside nests that they build from wood pulp. The most common locations for these nests in buildings are roof spaces, air bricks and wall cavities. Outside nests are often built in garden sheds, holes in trees, hedges and soil banks.

The building of each nest starts in the spring when the fertilized queen wasps emerge from hibernation and search for suitable sites to rear new colonies. This is usually around Easter time but can vary enormously depending on the weather and temperature. The number of queens emerging from a single property can vary from the odd 1 or 2 to what looks like a small swarm. Although it may appear that the queens are all together they are in fact working independently of each other in seeking out a nesting site. These individuals can be dealt with by purchasing an aerosol spray and applying it with regard to the manufacturer’s instructions. There is nothing that we (or any private company) can do at this stage.

When the queen has found a suitable site she begins building a nest about the size of a golf ball in which she lays between 10 and 20 eggs. Most of these will fail to result in an active nest. Initially the young queen feeds the larvae that emerge, but once they reach adulthood (‘worker wasps’) they take over the enlarging of the nest and the feeding of all subsequent larvae that hatch. This is usually from about late May to the end of June and it is from this point that we can consider treating it.

The queen continues to lay eggs throughout the summer until early autumn, by which time the nest can contain 3,000 to 5,000 individuals (although most are smaller) and can be up to 30 cm or more across. By this time most people will be aware of the presence of a nest by the continual wasp activity around the entrance point.

During the later part of the summer the nest produces fertile males and new young queens who emerge and mate. The males die and the now fertilized queens fly away to find somewhere to hibernate for the winter. This can be in lofts, sheds, garages, overflow pipes etc.

With the onset of cold weather, the workers and the resident queen all die. Again the timing of this can vary enormously and be anywhere from October to December, normally the first ground frost is regarded as the point from which the nest will rapidly die off. The nest is then empty and will never be used again. It can be left alone as it will not affect the chances of problems in future years or if it is certain that all activity has ceased then it can be removed. We do not normally do this as part of our service.

Although not a public health pest in the home, wasps often visit unhygienic places when foraging for food and therefore may carry germs. The main reason for control how ever is the wasps’ habit of attacking when disturbed or interfered with. The resulting stings are painful and to a small number of hypersensitive people, dangerous, sometimes fatal

As the wasp season nears its end in late summer, the worker wasps become more aggressive. This is due to the queen ceasing to lay eggs. With no larvae to feed the worker wasps seek sweet substances on which to feed themselves. A favored source of food is fallen, over ripe fruit. It is the ingesting of the often-fermenting juices that contribute greatly to the worker wasps’ increasingly aggressive behavior. It is also at this time of year that they more frequently come into contact with humans either looking for food indoors or attracted by heat or more often by light emanating from your home.

It is not unusual to get large numbers congregating around any light source from any nest within eyesight. This usually occurs in the early morning or late evening

Firstly consider whether or not it is absolutely necessary to destroy a nest, how much of a problem is it causing? Could you safely leave it alone? Remember wasps are beneficial to your garden helping with pollination and keeping other garden pests under control. The nest will die off naturally, even if left alone. However, if you are worried about stings to small children or elderly persons CALL US, we specialize in killing troublesome insects.