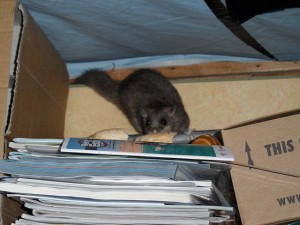 In appearance, the Glis glis is like a small version of the grey squirrel. The head and body are about 150mm (6″) long and the bushy tail is about 125mm (5″) long. The fur is silvery grey, shading to a light colour underneath and there is a ring of black hair around each eye.

The animal is common in Europe, but is not native to Britain. It was deliberately introduced into Tring Park in 1902 by Lord Rothschild (a keen zoologist and philanthropist) and has spread into the surrounding area. The extent of the spread is not fully known, but is thought to be no more than about a 30 mile circle from Tring – sometimes called “the Glis glis triangle”, although there have been unconfirmed reports of sightings at much greater distances. Today, the introduction of new, wild, species is prohibited by environmental laws (except when it concerns humans), but at that time no one had any concern for the long term implications of releasing what is, in effect, a pest into the UK. Glis glis cause considerable damage to trees and crops, and from the mid 1920’s onwards were causing damage in houses, particularly by gnawing woodwork and electric cables.

Like many small animals, Glis glis can appear to be attractive and entertaining. However, they are definitely not to be regarded as a pet or a cuddly toy. They have been described as sulky, standoffish and at times bad tempered. Once fully emerged from hibernation they are very nimble and fast on their feet.

Glis glis are nocturnal and in houses the first signs of infestation will either be noises heard in the loft at night, or signs of damage in the loft or outbuildings. The animals hibernate for long periods (the German common name for them is “Seven months” because they hibernate for the 7 months October – April)

Only limited research has been done on the life cycle of the UK population. It is thought that Glis glis emerge from hibernation in May and that a litter of 2 – 5 young are produced in July – August. It is possible that there may be more than one litter each year, but precise information is lacking. By the standards of small rodents, Glis glis have fairly long lives. It is known that animals in the wild live for 3 – 5 years and there is a record of a Glis glis in captivity surviving for 8 years. They are rarely found outside the Luton, Beaconsfield and Aylesbury triangle, where they are fairly common.

Because Glis glis are regarded as pests, it is illegal for householders to release them back into the wild. There are very strict laws about how Glis glis must be caught and dispatched – everyone involved must work under strict Government license terms. Do not be tempted to control Glis glis without recourse to a licence or a company working under such licence terms. Otherwise you may commit a criminal offence.

Problems involving dormice may be resolved without recourse to a licence. For advice from the regulatory body on edible dormice contact Natural England on 0854 6003078, or at the Nature England website. They will either assist you directly or put you in touch with your local Wildlife Management Adviser. Advisers can offer guidance to you over the telephone to ensure you do not contravene any legal methods of control.